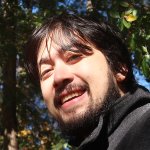 The first dark matter halos formed around redshift 30, at a time of about 100 million years. These potentially earth-mass objects are the basis for all larger structure, but their formation mechanism is special because they arise from the smooth mass distribution of the early universe. The halo formation process is depicted in this video. Immediately at formation, each halo develops a central structure in which the density scales with radius as ρ ~ r^-1.5. The properties of these prompt cusp features, such as their sizes and masses, can be predicted accurately and straightforwardly from the initial conditions without need for numerical simulations. Moreover, I find that prompt cusps can persist mostly unaltered as their halos grow and evolve. Since all dark matter halos grew from first-generation objects, the survival of prompt cusps implies that one should lie at the center of every halo and subhalo.

Prompt cusps are more compact than the halo structures normally assumed, so they have significant implications. For example, if dark matter is a thermal relic – one of the most widely discussed classes of model, produced in matter-antimatter pairs in the hot early universe – then it can annihilate inside dense regions into detectable radiation. In this scenario, the extreme dark matter density inside prompt cusps boosts the annihilation rate significantly while also dramatically altering its spatial distribution.